Behind the Roast Names

Caneadea used to be home to the most powerful tribe among the Iroquois – the Senecas – who were keepers of the Western Door.  Right across the Genesee River from the hamlet of Houghton sat the Council House where the five tribe leaders met to sign peace treaties and negotiate many important decisions.  The last of the Seneca to stay in his beloved homeland, was a Native American named Copperhead.  He lived on the bank near the present intersection of Centerville and old River Road.  He often shared lunch and stories with children who visited him.  He died March 23, 1864.  A friend and member of the Seneca tribe who had come to care for him, buried him facing the east as he desired so he could see the sunrise and the corn growing in the valley below.  According to Seneca custom, he was buried with his rifle and kettle.  As the years went by, the stream running down the hill threatened to sweep away Copperhead’s remains.  Responding to concerned people, John Minard, the local Historian, wrote to the editor of The Houghton Star.  Offers of financial help came from students and friends, and Copperhead’s remains were removed to a corner of the now Houghton College campus on June 10, 1914.  The monument, a large boulder, marks his grave.  The Boulder later became the name of the Houghton College yearbook in tribute to Copperhead.  Our robust dark roast is named in his memory. 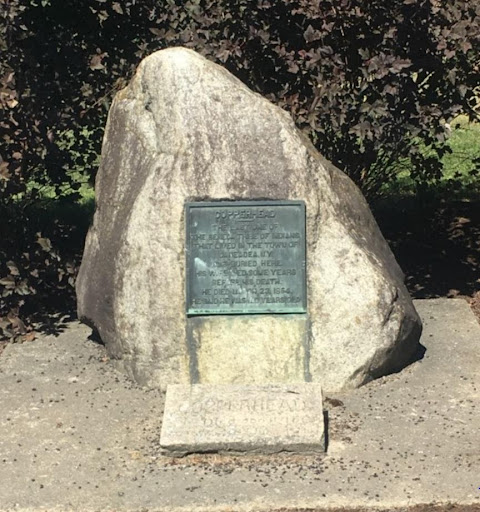 In it’s early days, Houghton Creek was extremely isolated.  Rugged features and a heavily timbered landscape throughout the area made it difficult to settle.  Because the Genesee River was not suitable for navigation, the village of Houghton Creek was accessible only by a narrow dirt road which was muddy in the Spring, dusty in the Summer, and deep with snow in the Winter.  Until 1851, when the canal reached Houghton, horses pulled wagons and buggies in the Summer or sleighs and cutters in Winter to move people and goods.  After the completion of the Erie Canal in 1825, areas remote from profitable markets, such as Houghton Creek, had an interest in building lateral canals to extend transportation to other parts of the state.  The Genesee Valley Canal, connecting the Erie Canal with the Allegheny River at Olean, was one of those laterals. In 1836, the New York State legislature authorized construction and work began the next year.  Following the Genesee River to Belfast, the canal then turned southwest through Cuba to connect with the Allegheny River, reaching Olean in 1856.  Between 1851 and 1878, canal boats pulled by horses or mules transported lumber, firewood, shingles, cheese and potash.  Packet boats provided passenger service from Rochester to Olean.  Pulled by 4 – 6 horses, these packets managed speeds up to 6 miles an hour.  Stagecoach drivers sometimes added to the pleasure (or anxiety) of their passengers by racing with the passenger boats.  During the winter months the canal was frozen over, idling the canal boats.  Some of the boatsmen, often rough men, spent their time while they were out of commission at the local taverns in Houghton Creek.  Racing along Jockey Street became a favorite recreation to pass the time.  We named our medium house roast Jockey Street to remember this unique piece of our history.

During the Jockey Street days, canal men captained boats pulled by horses along a towpath that ran right along the river.  When the canal was decommissioned, railroad tracks took the place along the towpath instead.  The railroad is now gone and what remains is the beautiful Genesee Valley Greenway Trail which runs from Hinsdale, NY through the hamlet of Houghton and up to Rochester, NY where the Genesee River meets Lake Ontario.  In total, it spans 107 miles.  More information about the trail can be found at fogvg.org.  It also happens to be the name of a beloved Houghton College English professor, Bill Greenway, who among other things established the infamous noon ball.  Our light roast breakfast blend coffee pays tribute to both and would be a lovely take along for a morning walk along the Greenway.

Letchworth State Park is a 14,427-acre wonder located in the northwestern part of the State of New York – roughly 15 minutes from our little corner of the world.  In 2015, Letchworth was named the USA Today’s Readers’ Choice for Best State Park in the nation.  It is about 17 miles long, following the course of the Genesee River as it flows north through a deep gorge and over several large waterfalls.  All park goers are familiar with the three most famous of the waterfalls – the Upper, Middle and Lower set.  With our dark roast decaf, we pay homage to Letchworth State Park’s breathtaking three falls.

Edmund Palmer was a canal boatman for nineteen years.  He learned boating from his father before him.  Unlike most of the other canallers, he refused to run his boat on Sunday.  Despite taking the Sabbath off, he had the reputation for making the fastest trip on the canal, perhaps because the horses were well-rested.  Elder Palmer, as he was known in later years, was recognized as a generous and loving man who gave of himself and his possessions freely.  He once prayed that the place "someday be as noted for its righteousness as it is now for its wickedness." Friends said that to be in his presence was delightful. Our delicious decaf is named in memory of his notable influence in Houghton Creek.
Highlander

From its initial beginnings in 1883 until 1967, Houghton College did not have an official mascot.  A student vote, held due to the addition of intercollegiate sports, selected Highlander as the winner.  Highlanders fit from a geographic standpoint, due to the campus's hillside location overlooking the Genesee River. Historically, the Highlander name has strong ties to Scotland, and while there is no direct connection to Scotland in Houghton's history, a creative poem penned by Ruth Brooks Luckey brought the story of the fictitious Angus McMillen to life.  The story chronicles the journey of McMillen from the Scottish Highlands to Houghton, N.Y., and the role he played in the formation and early life of the college.  Later in 2016, Houghton introduced the official lion mascot to campus, named Lucky after former president James S. Luckey who was instrumental in gaining Houghton it’s permanent charter and accreditations! The lion represents authority, strength, power, royalty, justice and courage. From a Biblical perspective, the lion depicts authority and power, with Christ referred to as the Lion of Judah.  Jockey Street Coffee Roaster’s second medium roast blend is named in honor of the Houghton College mascot.  Go Highlander’s!